At 2017’s Ignite conference Microsoft announced they would be shifting to a two Windows Release Channels model and introduced the Semi-annual Channel (SAC).  This new channel permits rapid adoption of new feature sets and capabilities in the Windows OS and enables Microsoft to remain agile in today’s rapid pace environments.  The traditional release model will continue and is now referred to as the Long Term Servicing Channel (LTSC).

An understanding of the Windows version system will help you understand the new Windows release channels.

Here we can see that this semi annual release is still:
Server 2016 – and not a cadence update (not a R2 release) – a new semi annual version release – new build # – current patch level

You can reference a list of known Windows versions and releases here: Windows Version Numbers 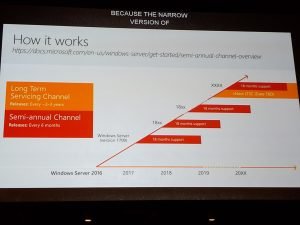 This is a pretty straight-forward release cadence but there are a few things to keep in mind:

This was done because MS felt that the feature needed more work. They have committed to re-adding the feature back into the next semi-annual release cycle which will come out 6 months from now.

Additionally, if deciding to engage the 1709 SAC release you may notice another component missing: The GUI.

1709 has no native GUI support with only a Server Core version available in this SAC release.  For some of us that have long transitioned to Server Core, this isn’t a big deal – but for others – may be a blocker.

With SAC, MS now has a lot of agility to adjust the OS as they deem fit. If Active Directory is having some issues for example, MS has the ability to remove that capability in a Semi-annual release and work towards improving it for a future release.
In the example of Storage Space Direct, that feature remains in 1607 (LTSC) but will not be present in 1709 (SAC).

What are your thoughts on the new Windows Release Channels? Which one will you be using in your environment? Feel free to comment below.