My main Core2Duo system from 2008 was beginning to show its age and I decided it was time for a desktop upgrade.  That system was originally built in 2003 and has been through several upgrade cycles already so I decided to start fresh this time with a new case and new components.

My goal for this build was to create a performance oriented desktop capable of a variety of different tasks.  I use my main desktop for various applications including:

Storage wasn’t a concern for this build as all data is eventually stored externally on the network.

After a lengthy research process, a lot of product reviews, and more than a few glances at MaximumPC’s Best of the Best list I decided on the following components:

Kudos to Newegg.com for a pleasant shopping, ordering, and shipping experience.

The build went together easily.  Corsair has really designed a well thought-out case with the 600T.  Overclocking was a breeze, the P9X79 Pro is built for it and there is a lot of online documentation for suggested settings.  SSD optimization in Windows was a little tricky but not impossible.  Aesthetic cable routing took longer than anything.

Overall I’m more than pleased with the build.  From power on to fully useable desktop takes just 14 seconds.  Complete shutdown occurs in just 4 seconds.  Programs open virtually instantaneously and I can perform multiple tasks without issue.  I’ve gamed, coded, edited, and transcoded 2 hour videos (sometimes at the same time!) and nothing has made this rig break a sweat.

It’s important to note that only transcoding has really tapped the two extra cores on the i7-3930K, so if gaming is your ultimate goal you may be better served with the 1155 socket as you will likely never utilize the full potential of the 2011.

That being said the 2011 is a serious workhorse capable of handling even the most intensive computing tasks in stride.  I believe it currently offers the best upgrade path over the course of the next several years.  It comes at a bit of a price premium, but certainly delivers today and likely for years to come. 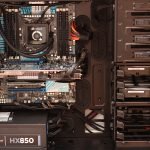 Interior shot of the completed build while it’s off. 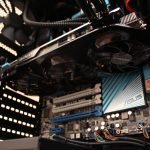 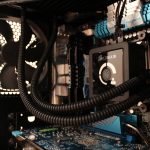 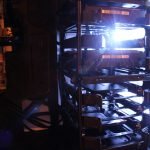 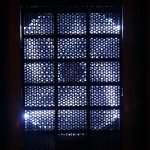 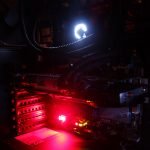 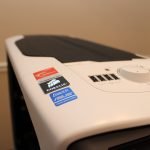 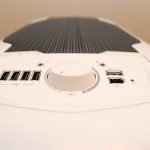 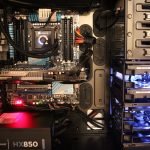 Interior shot of the completed build while it’s on.