Due to budget constraints my Synology DS1815+ is only populated with 6 WD Red drives, and the last two bays have been sitting empty for a while now. After a recent unrelated upgrade I found myself in possession of two Samsung SSD 830 Series 256GB drives. I’m not really in need of any additional storage drives in the DS1815+, so I decided to try out the SSD drives configured as Synology SSD Cache.

If you prefer video format over written documentation I cover how to configure and test the Synology SSD cache in the following Techthoughts video:

Before configuring SSD Cache on your Synology you should first familiarize yourself with the Synology SSD Technology Whitepaper.

IOMeter settings are essentially the same used in the Synology whitepaper testing for SSD caching.  The SSD cache was setup against a normal RAID 6 Brtfs volume containing several shared folders.

Initial No Cache results were not surprising with the DS1815+ only putting up around 100 IOPS of random 4KB access on all three tests.

What was really surprising was the dip in performance after I enabled the cache.  The same test results with SSD cache enabled dropped down to around 70 IOPS – a 30% decrease in performance.

Once I allowed the IOMeter test file to become fully cached though, performance became nothing short of amazing. 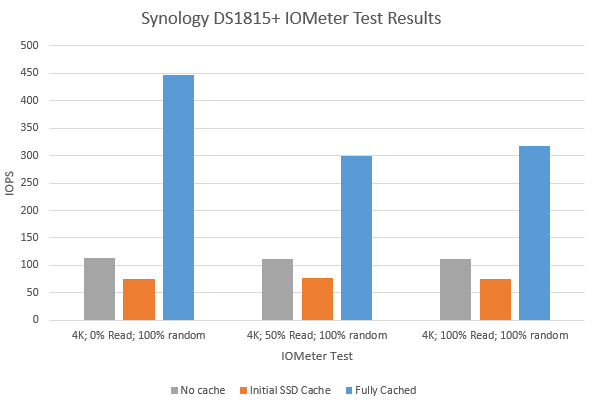 What’s really concerning though is that 30% initial drop.  It took four test runs of IOMeter before the test file became fully cached.

You can see the results in the graph below:

This behavior makes a lot of sense to me, with performance dramatically increasing as more data is cached.

What bothers me is that initial dip.  Based on these results it would appear that enabling the cache against a normal Brtfs volume actual incurs a penalty for the majority of the data on the volume. Sure, once data is cached it really starts to sing, but is a 30% drop in performance for the non-cached data worth it?

I was able to replicate this effect several times by removing and re-adding the SSD cache on the DS1815+.  In each testing cycle, IOPS testing suffers after the SSD cache is added.

Your scientists were so preoccupied with whether or not they could, they didn’t stop to think if they should. -Ian, Jurassic Park

Having a few SSDs laying around, and a few spare bays in your Synology NAS doesn’t mean your going to suddenly get an amazing increase in performance.

In fact, these testing results indicate that if you’re engaging a normal volume share, you may actually suffer a decrease!

You really need to understand your workloads, and what you hope to accomplish with the NAS.

A larger SSD cache, for example (1TB+) mounted to an iSCSI volume could really make some for some great VM performance on the DS1815+.

For now, despite the results, I’m going to leave the SSD cache in place and continue to report back on this article as I engage the device day-to-day.

If you’ve experienced different results, or have some recommendations on these findings, feel free to comment below.