Customize 8.1 Start Screen with task sequence for all users using MDT in 6 steps

In your environment you probably customize your user’s desktop icons, so you’ll likely want to customize the start/metro screen as well. This can be accomplished relatively easily by following the 6 step process below.
One thing to KEEP IN MIND: Your tile customization will be ignored if the applications you have set on the start screen are not present. Look at the example below. If you place the Metro customization in the task sequence before MS Office is actually installed, then those tiles will not be added during the task sequence. This goes for all applications. So make sure that if you are installing apps that will be part of the start screen customization, that they are installed prior to importing the start screen customization.

Step 1 – Customize your Start Screen on a reference PC

On a reference device, get your tiles setup and looking exactly the way you want.
My users appreciate the giant Desktop tile that allows them to easily get back to the Desktop. 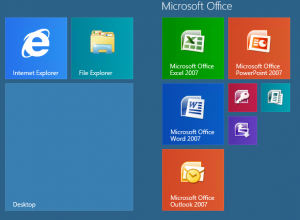 Step 2 – Export your start layout to a .bin file

On the reference computer open an administrator PowerShell window and run the following command:

Step 3 – Copy your .bin file to a location on the deployment share

Take the AppsFolderLayout.Bin file that you just exported to C:\alocation and copy it to your MDT deployment share. Take note of this location as you will need it during the next step.

Create a .ps1 file using the example below. You will need to specify the location of the .bin file that you copied in step 3 for this script to work correctly. (\\deploymentshare\apath\)

During deployment your device will have the Z: drive mapped to the deployment. Because of this the task sequence will have no trouble referencing the script you just created as long as it is located somewhere on the deployment share. Take note of this location as you will need it during the next step.

Step 6 – Add a PowerShell step to your task sequence

Create a PowerShell task sequence under General –> Run PowerShell Script.
Call it whatever you like, I called mine Customize Metro Screen

Under properties reference the .ps1 file you copied in the previous step. 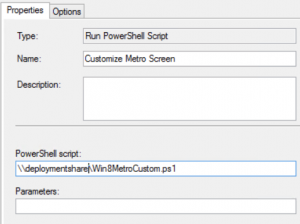 Your task sequence will reference your PowerShell script (.ps1) which will reference your .bin file which will then add the custom start screen layout to the default user profile. Any user who logs in will then get the customized metro setup. One thing to note is that this has no effect on local accounts. So, you will not see the results of your start screen customization efforts until the deployment completes, and you log in with your first domain account.