MDT and WDS working together 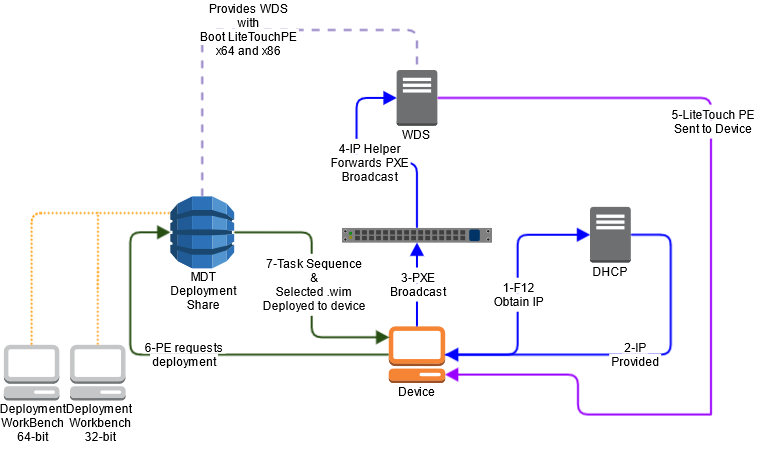 To understand how MDT and WDS work to complement each other it helps to first understand the differences between these two systems.

Windows Deployment Services (WDS) is a server based technology used for deploying images of Windows operating systems and operates as a server role in Windows Server 2003 SP2, Server 2008, Server 2008R2, Server 2012, and Server 2012R2.  WDS utilizes disk imaging and can perform network based installations of captured images which are typically stored in a .wim format.  Image deployment over the network is accomplished through WDS’s use of the Preboot Execution Environment (PXE) to load a miniature version of Windows known as Windows Preinstallation Environment (PE).

WDS supports the management and deployment of driver packages which allows you to manage a variety of devices and architectures within your environment.  However, it does not support the ability to deploy software or configuration changes during the deployment process.  This necessitates the use of thick images which contain all software, configurations, settings, and updates pre-configured and set in your master image before being captured and deployed.

The Microsoft Deployment Toolkit (MDT) is a “solution accelerator” used for designing and creating operating system and application deployment.  It is typically used in concert with the Windows Automated Installation Kit (WAIK) to produce highly customized and automated deployment solutions.

MDT is a task based deployment process that offers unparalleled control over every step of the deployment:

Due to the dynamic nature that MDT provides it permits the use of a small, clean, thin base image that can be added to during the deployment process based on criteria  you identify ahead of time.  Additionally, because software and settings are added during the active deployment process the need for multiple specialty images is reduced.  You can deploy the same base image to two different areas and through the use of varied task sequences deploy a completely varied set of software packages and settings.

Simplified, WDS can capture thick images of your reference device and deploy that thick image with driver support to various devices within your environment using PXE.  MDT is more of a design tool for creating a highly custom step-by-step deployment sequence.

It’s important to note that MDT in and of itself doesn’t have a true deployment system.  You can create a Lite Touch Deployment USB drive with MDT and visit each device independently, but for true deployment capability MDT works best in concert with WDS.  Some people ask the question: WDS is already a complete and standalone OS deployment solution, why not just use it for deployment needs?  The answer is simply customization capabilities.  MDT offers unparalleled customization options during deployment.  We are also moving away from thick images as discussed in this article: Image Build Best Practices.  Thin images offer numerous advantages to the imaging building process and lifecycle.  So, a combination of MDT’s customization and WDS’s PXE deployment capabilities results in an ideal deployment solution.

To give you some insight into how the two technologies work together I have created the diagram above.

The process begins with the deployment workbench which can be a server or client device typically loaded with the Microsoft Deployment Toolkit (MDT) and the Windows Automated Installation Kit (Windows AIK).  In older versions of the MDT two were required to successfully configure both 64-bit and 32-bit answer files.  Modern versions of the MDT support both 32-bit and 64-bit answer file configuration.  The deployment workbench will be were you setup, configure, and customize the settings on the deployment share. (The deployment share is a storage location located on your network capable of sharing files with devices you wish to deploy to).

The MDT/WDS diagram illustrates the use of the two technologies in a Lite-Touch deployment scenario.  For the purposes of this explanation the WDS server exists as a separate server and is not integrated with the DHCP server.  You can read more on my thoughts on that topic here: PXE booting with WDS – DHCP Scope vs IP Helpers.

MDT is the star of the show

It’s worth noting that while WDS adds spectacular functionality with PXE booting, MDT is doing the real heavy lifting here.  As soon as the WinPE boot image is downloaded, it immediately accesses the MDT Deployment Share and the remainder of the operation (over 90% – maybe more) is handled via the MDT Deployment Share.  From a bandwidth and performance standpoint, this means that your MDT share should be a lot more powerful than your WDS server.

You can read more about MDT and the deployment process here:

I also recommend checking out Scriptimus Ex Machina – Andrew Barnes has some excellent MDT information there.